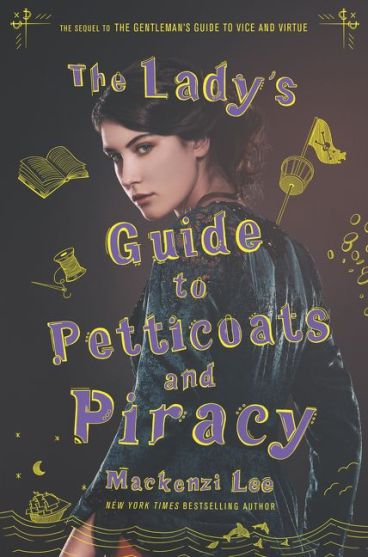 I thought this was a solid sequel to The Gentleman’s Guide to Vice and Virtue!

In this installment we follow Felicity who is currently in Edinburgh trying to find some form of apprenticeship to train to be a physician. However a sudden marriage proposal has thrown her off track and she makes her way to England to try to further her education at a medical school to get her life back together.

I found Felicity to be a very enjoyable character. She I tenacious and driven and isn’t afraid of hard work. I love that we see her strive so hard and fight for what she feels she has earned, despite the fact that she is a woman. I love that Mackenzie Lee has highlighted the plight of woman back in the 18th century. The growth that Felicity undergoes in the plot is wonderful and to see her become more self aware and ok with herself I feel was a great highlight in the story.

Another character I highly enjoyed was Johanna. From her introduction as the societal princess who enjoys parties and dresses and makeup and then to see Felicity’s perception of her change over the course of the book was great. I loved that we see Johanna challenge Felicity multiple times and expose her kind of elitist mentality. The changes in their relationship in the storyline was very well done and I loved how open and honest they were with each other in the end.

Sim was a little bit up and down for me personally. I didn’t really like her for a majority of the book mainly because we didn’t get enough information about her. She was very secretive and pensive for about three quarters of the story. When we finally get her backstory and history about who she is I became a lot more invested in her character and engaged a lot more with her. I thought the relationship between her and Felicity was a little too forced in my opinion. The three girls were already tied together closely by the plot that including that romantic aspect wasn’t really necessary.

This was a very fast paced and action packed with the storyline evolving and changing very organically which kept me turning the pages. I like the little cameos of Percy and Monty they added a lot of witty banter to the dialogue. I thought the story was very unique and adventurous but still has a relevance to present day.

⭐️4/5 stars I honestly didn’t expect to like this as much as I did!