I’m pretty proud of my efforts this month! I completed all the books on my TBR as well as one extra from last month and the Harry Potter book I got through! I had some great reading experiences this month and I have found some books that are definitely sneaking their way up my list of all time favs.

The Unbecoming of Mara Dyer by Michelle Hodkin – ⭐️4.5/5 stars

The King of Attolia by Megan Whalen Turner – ⭐️4/5 stars

Harry Potter and the Prizoner of Azkaban by J.K. Rowling – ⭐️5/5 stars

Bit of a slow start but it definitely ensnared me in the end!

Kazi is a reformed thief who has worked her way up to become one of the Queen of Verdan’s esteemed Rahtan soldiers. Jase is the new patriarch of the Ballenger dynasty after the shocking, sudden death of his father. Kazi is sent by the Queen on a secret mission to find and capture a wanted war criminal and Jase and the Ballenger family are believed to be harboring the fugitive.

Like I said it started off a little slow and confusing for me. We are kind of thrown straight into the story with lots of different names and locations and it took me around the first 100 pages or so to be situated in the storyline.

Kazi is a wonderful character. I love that she is so competent and sure of herself, yet she still carries those feelings and memories of her youth with her and uses them to strengthen herself. To see where she has come from and how dire and desperate her situation was to the bright, daring, dangerous woman she is now is admirable! She is very multifaceted and is quite unique I feel as the main female protagonist.

I love how committed Jase is to his family and his oaths as the Patrei. We see how engrained it is in his demeanor and actions throughout the course of the book. I like how we get to know the real Jase before we see the Patrei side and how they differ. Another character that is complex and rooted around the concept of family and loyalty and trust. Once that is broken there is no turning back with the Ballengers.

I also appreciate how the romance aspect plays a role in the story, it isn’t just written in for the sake of it. I kind of like the hate to love trope but throwing the backstory of the characters and the situational timing really made me invested. I thought it came across as genuine and made sense in terms of the plot. It carried a lot of action forward and created some intense, awkward and charged scenes.

The actual storyline was fantastic. All of the history of the town and the family and all of the secrets really kept me intrigued and eager to read on. Once you surpass that 100-page mark the pace really picked up and you get swept away. I really made a connection with these characters and I was highly invested in their missions. I kind of didn’t want the book to end, I just wanted to keep reading and find out what’s going to happen next!

I thought I would start this fun new series on my blog where I compare a book with their movie adaptation and I give you my thoughts and opinions on both. Whether or not you should just stick to the book or if the movie is better than the book, pros and cons and what I would recommend overall!

This month I decided to go with To All the Boys I’ve Loved Before because it’s pretty fresh on my mind as I just read it a few weeks ago. I see the hype for the movie all over my social media but I try not to watch movie adaptations if I haven’t read the book first. I don’t know it’s just a personal preference of mine I would prefer to read the book and then watch the movie and kind of know what’s going on.

So with all that being said these are my thoughts on To All the Boys I’ve Loved Before are:

Pros: I believe they cast Lara Jean very well, she is exactly how I pictured her in my mind! She was also a lot more mature in the movie compared to the book, which I appreciated. I liked that the movie stayed with the original storyline of the book, it didn’t really deviate all that much from the original.

Cons: I wanted to see more of the connection she shares with her family, especially Margot. They kind of skated over the fight that they had and it was quite a significant scene in the book. Also it didn’t quite depict how close the Covey’s were to Josh. Lara Jean especially had quite a close relationship to him and that wasn’t really shown in the movie. They didn’t quite go in depth with her relationship with Peter either. They had a lot of scenes together that really deepened their connection that wasn’t shown in the movie.

My Recommendation: Either depending on your chosen format. You definitely don’t need to read the book first to enjoy the movie! I slightly enjoyed the movie more but I think it was because I had already read the book and was already informed on the plot. 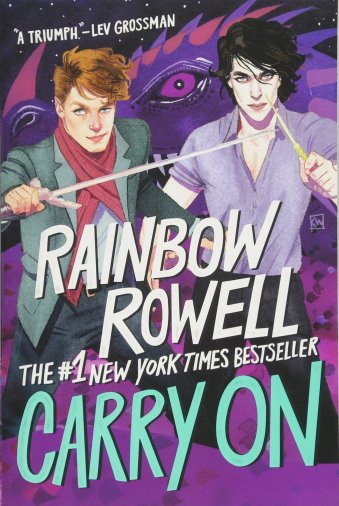 Thought it was just okay.

We follow the story of Simon Snow who is the chosen one. He is the most powerful mage that ever was and he is prophesied to change the world. However, he isn’t the most skillful of all the students who attends Watfords; the magical school presided over by the High Mage. None of his spells ever work and his wand doesn’t even respond to him half the time.

The beginning of the book I didn’t really enjoy all that much. It was just Simon recounting his history of the school and what he did in the last 7 years he went there. I didn’t immediately make a connection with him and I wasn’t really invested in the story at the start.

The magic system I wasn’t a big fan of. All of the random sentences and rhymes that make the spells work felt a little juvenile for me. It was a little too mundane and not fantastical enough for me personally, I couldn’t really take it seriously.

Simon was just kind of ok to me. I found him to be super obsessed with Baz and the Mage and not much else. The first hundred pages or so was just him fixated on the fact that Baz wasn’t at school and why. I wasn’t really interested until we got a lot farther into the story and we dug deeper into his history and why he is the chosen one.

I did enjoy Baz a lot more than Simon. I thought he was more unique and distinct as a character. I like that we get an explanation of why he was so mean to Simon over the years and it makes him more redeemable in my eyes. He’s been hiding so much of himself from the rest of them and I love that he finally gets the chance to be free and truly be himself.

The plot was a little boring to me. I was mildly interested in finding out about Baz’s mother and the whole conspiracy surrounding her death but everything with the Coven and the families just didn’t interest me all that much. I did enjoy the twist at the end and I like that the multiple perspectives exposed different aspect of the storyline.

This wasn’t a favourite of mine, I can see why a lot of people would love this story but again it just wasn’t my taste.

This book was great!

Gen has managed to become the King of Attolia. Though he always maintained that he was in love with the queen and not the crown and he made his thoughts known throughout the Attolian court. Not paying attention during meeting, wandering around, acting indifferent towards the queen. Then he drags a young naïve guard into the middle of his political maneuverings. Cortis hates the king he is a staunch supporter of the Queen and feels like Eugenides has stolen the crown. Little does anyone know Gen is not someone to be trifled with and he will find a way to come out on top.

I loved the introduction of our new character Cortis. I like that he isn’t a fan of Gen and we slowly over the course of the storyline see his feelings and loyalties start to shift. I loved seeing the inner workings of the guards and attendants and how the interact with each other; the little ongoing rift between them added a nice spark to the storyline.  I thought Cortis was quite honourable and likable, he doesn’t just blindly accept rumors or speculation, even though he wants to. He sees what kind of person the King is and can’t help but grudgingly respect him.

Gen was once again simply fantastic. I loved that we get to really see how he is portrayed through different perspectives. Because we don’t see his every move you can’t help but think something else might be going on. Nothing is really ever as it seems with Gen, he might make you think a certain way or give the impression of something but the truth is totally different. We get to see so many different sides to him in this book and he had me second guessing his character for a bit there but I knew that he had to have something up his sleeve. I like being surprised by him on a regular basis; it keeps me invested in the plot.

The whole premise and continuation of this storyline was fantastic. I think Megan Whalen Turner definitely went in the right direction and totally sets up the rest of the series beautifully. There are so many different directions the plot can go now that Gen has stepped up and finally become the true King of Attolia. Seeing all the little intricacies in his plans and how it all came together in the end was masterful. I honestly loved this book and I am very excited to continue on with this series very soon!