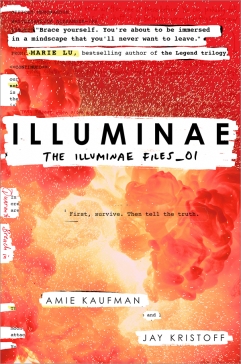 Illuminae follows the story of Kady and Emery who live on a tiny planet made of ice on a colony called Kerenza at the edge of the universe that was being mined by a megacorporation. On the day that Kady and Emery decide to break up the planet is invaded and attacked by a rival megacorporation called BeiTech. Somehow they both make it off the planet on separate spaceships, Kady on a science vessel called the Hypatia and Erza on a battle carrier called the Alexander with one more ship called the Coepernicus. The main ship that BeiTech used in their assault is the Lincoln and it has been chasing the three vessels for the last six months as they try to make it to a far off jump station called the Heimdall.

Ok, I will admit for the first hundred pages or so I was completely lost. There was a lot of information thrown at me in a short period of time and it took me a minute to adjust to the unique structure of Illuminae. I without a doubt have never read anything like this book before and it had me a little frazzled to begin with. However, after the plot really picked up and I had become more accustomed to the storyline I was completely engrossed! The characters are diverse and you really get a feel of everyone through the intimate form of communication that they use. The language throughout the novel jumped a lot from informal to formal and I loved the juxtaposition between the two, it really helped you to relate to a majority of the characters.

Kady is just fantastic; I absolutely loved her tenacity and determination and the staunchness that she radiates as she faces repeated horrors and grief. Ezra was such a relatable character. He wears his heart on his sleeve and he has such great relationships with those around him. I love the camaraderie he shares with his fellow pilots and the emotions he displays over the course of the novel was touching to read. Aidan was a little bit of an enigma for me. I don’t really want to get too into details and spoil the storyline but I really didn’t trust or believe anything he said after the Copernicus. I thought Kady was a little naïve for believing him at first but as the story progressed you really get a sense of the depth of the character and it explored a whole different avenue that I really wasn’t expecting.

This kind of composition is really engaging and it keeps you highly entertained. The plot is so fast paced and with the stakes being so high you are on the edge of your seat throughout the whole storyline. I loved it, it was honestly a breathe of fresh air and I cannot wait to jump into Gemina and Obsidio in the very near future!

⭐️4/5 stars didn’t know what to expect but loved it!