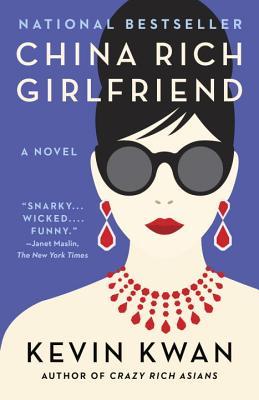 China Rich Girlfriend continues about 3ish years after the first book finished. Nick has had no communication with his mother and they are in the midst of planning their wedding. Eleanor won’t take no for an answer and when a chance encounter enables her to solve the mystery of Rachel’s father she is able to work her way back into their lives.

This honestly went so much more in depth with the other familial components of the story and we also got a new setting in Shanghai rather than just Singapore. It was nice to see the difference in culture and lifestyle between the two cities. Again this book was just very rich, it went into quite minute details of just how wealthy these families are and how the act accordingly. There were times when I was a little confused as to who belonged to which family and how they tie back into the story but after a while I was able to wrap my head around it!

Once again I really appreciated all the addendum’s and I thought they were a great learning resource and it added a lot of depth to the story, from explaining what certain words mean in the different languages to explaining the foreign dishes and even pop culture references.

I loved the direction the book went with in this sequel. Totally different than what I thought was going to happen and I enjoyed that I was surprised. We are introduced to a whole plethora of new and interesting characters that kept me entertained throughout the story. Collette in particular I was intrigued by. I thought she was a nice contrast to Rachel and also to the other socialites in Singapore. She is a lot more flashy and outspoken and won’t give into to her parents’ wishes. I liked how that story line played out and Rachel was kind of given the last word after everything that happened with her.

I enjoyed the progression of Kitty’s story line as well, even though she doesn’t overlap with Rachel and Nick she doesn’t disappear and I was invested in finding out what happened with Bernard and her daughter. I honestly didn’t pick up any of the signs of what was to come and I thought it was a pleasant surprise and very on point with her character!

I was also highly invested in Astrid and Michael. I really wanted Astrid to stand up to him more and stop relying so much on Stuart. Granted she was really trying to be the perfect wife to him and adjust to his new status and self-worth but the way that he was speaking to her and the fact that her friend was able to notice and point it out to Astrid and she still didn’t really do anything frustrated me!

All in all I was sucked right back into the story line from the start and at every turn I was surprised and entertained by the wild antics that these uber rich Asian families get up to!