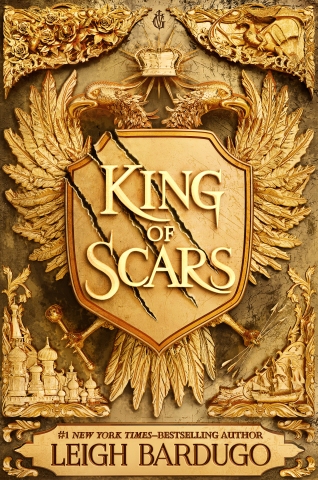 We follow the story of Nikolai who has established himself as the King of Ravka after the horrors that was faced with the Darkling. Unfortunately Nikolai didn’t come out of the war with the Darkling quite the same as he has a darkness inside of him that grows stronger with each passing day. Zoya has pledged herself to the King and has devoted her life to rebuilding the second army of Grisha soldiers. She knows that the Grisha cannot survive in this world without Ravka and she will stop at nothing to help Nikolai in his endeavors to secure the throne. Nina is currently far north sent on a mission by the king to seek out Grisha refugees and help them to reach Ravka. Battling her own grief she is struggling to face the pain of her past in order to look ahead at her coming conflicts with those who seek to destroy the Grisha for good.

I will say in my opinion you definitely need to read the Grisha trilogy and the Six of Crows duology to make any sense of this book. Its been a few years since I’ve read the books and I found myself at the start really struggling to remember all the characters and which powers they have and what role they played in the previous books. A lot of the plot is focused around what had happened previously in Ravka and trying to rebuild after the war with the Darkling.

It was a little difficult at first to get situated into the story but once I found myself reacquainted with the characters the plot really progressed quite smoothly. I didn’t quite enjoy Nikolai from what I remember in the Grisha trilogy but I appreciated him a lot more in this book. I loved reading from his perspective and seeing his daily struggle with presenting himself as the King Ravka deserves but also trying to keep the monster in him at bay.

Zoya is fast becoming one of my favourite characters. I love how stoic and brash she is and also seeing how fiercely loyal she is to the king and the crown. The banter between her and Nikolai was highly entertaining and the mutual respect shown between them was a delight to read. I really enjoyed that we learnt a lot more of her history and why she made the choices she did in the previous books.

Nina was a character I highly enjoyed in the Six of Crows duology. I loved her arc in the books and I really appreciated that we get to continue to follow her story and see what happens with her next. She is so determined and strong willed that I feel she is definitely going to make a strong impact in the coming book.

I feel the pacing of this book was very well done. The start was a little bit slow I feel it was necessary to reintroduce the characters and to get the plot underway as there is a lot going on all at once. There was a gradual build up of anticipation throughout the course of the book, which kept me invested and wanting to read on. I thought this book was an impressive start to this new duology and after that ending I really feel like it has set the next book up for an explosive conclusion!

⭐️4/5 stars Loved my experience falling back into the GrisaVerse!