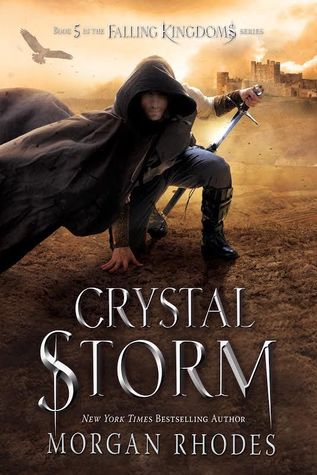 Once again we are continuing straight off where Frozen Tides concluded. Magnus and Cleo have decided to accompany King Gais to visit his mother who was thought to be dead. Jonas, Felix, Nic and Taran are sailing back to Paelsia along with Prince Ashur who was also thought to be dead.

So Lucia is warming up to me now. I like that we see her acknowledge all of her wrongdoings not only to Timotheus but to Jonas as well. Saying she deserves to die for all of the pain and devastation she has caused around Paelsia. I think her discovering she is pregnant really made her stop and think about what she was actually doing and why. I still think she is quite selfish and arrogant but that is really a cause of her upbringing, I just hope we see her mature and gain a little bit more humility in the upcoming conclusion.

Magnus and Cleo didn’t have enough moments together for me. We still see them continue to keep secrets from one another, which is causing issues in their relationship. I didn’t like the fact Cleo won’t open up to everyone and let them know she loves Magnus, I just think it shows she’s a little ashamed of her emotions and doesn’t want her friends to hate her. I think sure they might be a little disappointed, Nic in particular but if they really love her as much as they claim to, they would get over it. I enjoyed that we see Magnus be a little insecure and jealous of Cleo’s friendship with the other rebels, Jonas in particular. I just wish he would communicate his feelings to Cleo more openly instead of bottling them up.

I liked the inclusion of Selia into the plot. I thought she was intriguing and interesting characters. I loved her interactions with Cleo and I thought her devotion to her son was quite relatable, even though he’s this horrible person. When her real motives are finally revealed it was definitely a twist that I didn’t see coming!

This book was a little more stagnant compared to the previous books. The pacing is still quite fast and there are many twists and revelations that keep you invested and entertained. For a good chunk of the story all of the characters are in one place. I like that the story has kind of been centralised and all of the main players have come together and we see some of the schemes and plans come to fruition.